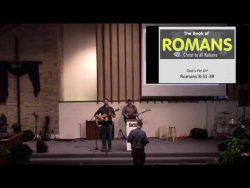 Get Going: If God is for us what excuse do we have?

Recap: From chapter 3 Paul has been describing to us who nothing can save us out side of the grace of God, through the justification of our faith by the death of Jesus.  Nothing else can make us right with God, not law, not morality, not works, not anything of ourselves which is only saturated in our sin.  Only God can save us.  Last time that was magnificently laid out for us by Paul in the chain of salvation:

Context:  Paul asks us questions about our salvation in Jesus so that we would not only think clearly whilst going through suffering, but also to raise our game in getting on with the mission of taking Jesus to the world.

We are meant now with the assurance of God’s actions described in v.28-30, go on with our lives in worship, fearing no condemnation from any man or devil or inward struggle of the flesh. Fearing no separation from God, despite all of the poison and pollution of sin in the fallen world.  Confident, confident, confident, the Christian is meant to be as He proclaims the brightest name of Jesus in to this dark world in a life of Worship.

MAIN IDEA: To KNOW that by God’s justification we are free from condemnation and nothing can separate us from Him

Transformational Intent: To Freely Worship the God of Justification by Faith

Get Stuck Into Understanding the Bible:

We are never too guilty to be forgiven. Take confidence in v.33-34, (great verses for preparing for the Lord’s Supper)

Use the songs below to engage your heart and mind into worshiping God.

Before The Throne of God Above By Charitie Lees Bancroft

Behold Our God By Sovereign Grace