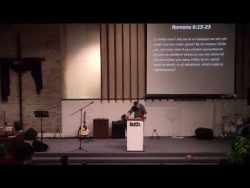 15 What then? Are we to sin because we are not under law but under grace? By no means! 16 Do you not know that if you present yourselves to anyone as obedient slaves,[a] you are slaves of the one whom you obey, either of sin, which leads to death, or of obedience, which leads to righteousness? 17 But thanks be to God, that you who were once slaves of sin have become obedient from the heart to the standard of teaching to which you were committed, 18 and, having been set free from sin, have become slaves of righteousness. 19 I am speaking in human terms, because of your natural limitations. For just as you once presented your members as slaves to impurity and to lawlessness leading to more lawlessness, so now present your members as slaves to righteousness leading to sanctification.

20 For when you were slaves of sin, you were free in regard to righteousness. 21 But what fruit were you getting at that time from the things of which you are now ashamed? For the end of those things is death. 22 But now that you have been set free from sin and have become slaves of God, the fruit you get leads to sanctification and its end, eternal life. 23 For the wages of sin is death, but the free gift of God is eternal life in Christ Jesus our Lord.