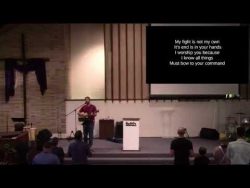 English Standard Version
27 Then what becomes of our boasting? It is excluded. By what kind of law? By a law of works? No, but by the law of faith. 28 For we hold that one is justified by faith apart from works of the law. 29 Or is God the God of Jews only? Is he not the God of Gentiles also? Yes, of Gentiles also, 30 since God is one—who will justify the circumcised by faith and the uncircumcised through faith. 31 Do we then overthrow the law by this faith? By no means! On the contrary, we uphold the law.

4 What then shall we say was gained by Abraham, our forefather according to the flesh? 2 For if Abraham was justified by works, he has something to boast about, but not before God. 3 For what does the Scripture say? “Abraham believed God, and it was counted to him as righteousness.” 4 Now to the one who works, his wages are not counted as a gift but as his due. 5 And to the one who does not work but believes in[a] him who justifies the ungodly, his faith is counted as righteousness, 6 just as David also speaks of the blessing of the one to whom God counts righteousness apart from works:

7 “Blessed are those whose lawless deeds are forgiven,
and whose sins are covered;
8 blessed is the man against whom the Lord will not count his sin.”