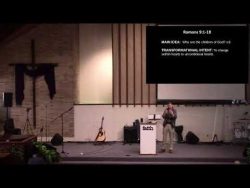 19 You will say to me then, “Why does he still find fault? For who can resist his will?” 20 But who are you, O man, to answer back to God? Will what is molded say to its molder, “Why have you made me like this?” 21 Has the potter no right over the clay, to make out of the same lump one vessel for honorable use and another for dishonorable use? 22 What if God, desiring to show his wrath and to make known his power, has endured with much patience vessels of wrath prepared for destruction, 23 in order to make known the riches of his glory for vessels of mercy, which he has prepared beforehand for glory— 24 even us whom he has called, not from the Jews only but also from the Gentiles? 25 As indeed he says in Hosea,

27 And Isaiah cries out concerning Israel: “Though the number of the sons of Israel[a] be as the sand of the sea, only a remnant of them will be saved, 28 for the Lord will carry out his sentence upon the earth fully and without delay.” 29 And as Isaiah predicted,

“If the Lord of hosts had not left us offspring,
we would have been like Sodom
and become like Gomorrah.”