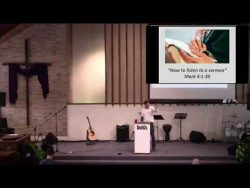 COMMUNITY GROUP NOTES FOR How to Listen to a Sermon:

INTRO:  What makes a sermon different from other forms of bible teaching?

Recap: Mark has been quick in his introducing Jesus. Who He is, what He has come to do, and what that means for you and me. He has shown us Jesus’ authority to teach, heal, and call men to follow Him. The religious people of the day have rejected Jesus, as much as He has rejected their religious works.  There is to be a New Time and a New people of God, now not just from the Jews, but every tribe tongue and nation. Jesus is King of His Kingdom, which is to cover the whole world and everyone who follows Him is part of the family, (as well as part of His Kingdom), their distinguishing mark is not being biologically related, but those who do “the will of God ”, (3:35).

Context: : In Mark 4:1-20 Jesus shows us what it looks like to do the will of God (cf. 3:35). He explains to his disciples why  there is a mixed and often hostile reception to

His ministry. He assures them that the kingdom will grow. This chapter is one of two large blocks of teaching in Mark’s gospel.  The two big ideas in this passage are “the Kingdom of God” ,(4:11),  and “hear the word” ,(4:9,12,15,16, 18, 20). Jesus continues to teach about who is in the Kingdom and how it will grow.  The first thing that Jesus says helps us understand what response he is looking for: ‘Listen!’ Those who are part of His family and recognise Jesus as King hear the words of the Kingdom, His words, the Bible, accept it, and bear fruit from it (4:20).

AIM: To Hear AND accept God’s word in order that we might bear fruit. v.20